This post is part of a virtual book tour organized by Goddess Fish Promotions. One randomly drawn commenter will win eBook copies of Survival Game by Susan Mac Nicol and Grady by M. Tasia. Click on the tour banner to see the other stops on the tour. 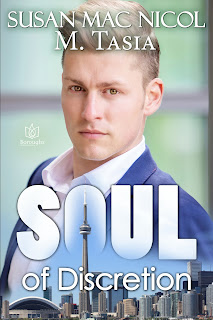 CAN YOU KEEP A SECRET

Simon Bridgeworth believes in loyalty, and keeping things in-house. When he discovers his best friend, who has been running the Canadian division of Simon’s tech empire, has been skimming millions from the company, Simon flies to Toronto to get to the bottom of the theft and learns his friend has been murdered. Devastated and at a loose end, Simon knows there’s no way the company’s problems can be kept under wraps now. Imagine his surprise when he learns the Mountie investigating the murder is the first repeat Simon has allowed himself in years.

Sergeant Nick Cooper is a proud member of the Royal Canadian Mounted Police. He’s served his country in the military, and now he’s protecting the citizenry of Toronto. But devotion to duty is no longer enough. On a whim, Nick hooks up with Aristocrat69 on crUIzer, and what started as one night of incredible sex turns into an attraction neither man can ignore. When a grisly mob murder sends Nick to the Breakforce corporation, he is shocked to discover his lover is none other than its CEO. When Simon’s life is threatened, ethical lines blur as Nick does anything to keep him safe – no cost is too high for the man who has become Nick’s everything.

Despite his experience at hook-ups and having sampled a wide range of the male population across the world, Simon’s jaw dropped on seeing the man in front of him.

Sweet Jesus. His profile picture didn’t do this man justice at all. He was, quite simply, stunning. And big. And muscled.

Crystal blue eyes stared at him from beneath short-cropped dark hair and from the expression of appreciation on the hook-up’s face; he was finding Simon equally as tasty. Dressed in old comfortable jeans, a jacket that looked as if it had been rescued from a thrift shop, and large boots that were scuffed and worn, the hook-up was exactly what Simon needed.

Simon gestured the man in. “Come in, Northernsalute,” he murmured with a smile. “I have a feeling we’re going to get on fine.”

Northernsalute grinned as he came in, his blue eyes crinkling with laugh lines and the trimmed stubble around his jaw looking deliciously lickable.

“Yeah?” He reached out a calloused hand and stroked Simon’s jawline. “I think I might agree with you on that one, Aristocrat sixty-nine. I’m a sucker for a man with an English accent.”

Simon rolled his eyes as he closed the door, and watched his guest—well, his guest’s extremely tight arse—stride across the room to stand by the cocktail cabinet Simon had already opened.

“Not the first time I’ve heard that,” he said. “I don’t know what it is about the accent that triggers horniness on this side of the pond, but I thank God for it. Perhaps someone should do a study on it.” He gestured to the bar. “Would you like a drink first? I know we’re here to fuck but there’s no point in not being civilised about it.” He noticed his “date’s” flinch at Simon’s choice of words. Oh God, he groaned inwardly. Please don’t let this guy be another needy bastard like the last one.

“Whisky, neat. No ice. Oh, and the name’s Nick. I can’t imagine calling you Aristocat sixty-nine all night so figured we might as well swap names now.” Nick raised an enquiring eyebrow as he shrugged out of his jacket and placed it on the back of the sofa.

Simon poured the drinks. Whisky for Nick, and a bourbon for himself. He’d developed a taste for it when he’d lived in New Orleans some years ago. “If you wish. Mine’s Simon. Please refrain from any cute ditties about ‘Simon Says’ because I’ve heard it all, and I’ll probably re-arrange your face if you try it. Especially in bed.” He handed the whisky to Nick, marvelling at the way the man’s face lit up in laughter.

He really was an attractive chap, Simon mused. With a personality to match. He might be worth a repeat or two while Simon was here. Save him explaining his hook-up philosophy to a new men.

“Duly noted.” Nick’s twang was sexy and Simon wasn’t averse to hearing more of it. He walked over to the couch and sat down, patting the seat beside him.

“Let’s have a drink, then we can get down to business.”

One randomly drawn commenter will win eBook copies of Survival Game by Susan Mac Nicol and Grady by M. Tasia

Sue writes steamy, sexy and fun contemporary gay romances, some suspenseful, some gritty and dark, and others just plain ahhhh….

Lover of angst and conflict, she enjoys putting her characters through the emotional wringer and bringing them out the other side with an HEA, or, at the very least, a HFN.

She is a PAN member of Romance Writers of America and is also a member of the Romantic Novelists Association in the UK. She’s the Editor-in-Chief at Divine Magazine (www.divinemagazine.biz), and she’s a Charity Board trustee at Being Me in London (http://www.beingmecampaign.com).

Sue is passionate about research and has stayed in a circus, taken lessons from a blind person on how it feels to be non-sighted, and has travelled to a lighthouse with maintenance crew to see firsthand what it’s like inside. She’s also written a screenplay with a Hollywood actor/producer, with a view to taking her book, Sight Unseen, to the big screen. 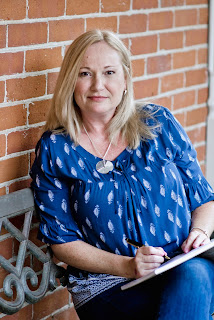 Michelle is a paralegal and author who lives in Ontario, Canada. A member of the RWA and its chapter RRW, she is a dedicated people watcher, and a lover of romance, 80’s rock, and happy endings. Married to a good man, mother of two wonderful girls, Michelle is also a servant to two spoiled furry children.

Confessions of a Red